Shopping Cart
Your Cart is Empty
Quantity:
Subtotal
Taxes
Shipping
Total
There was an error with PayPalClick here to try again

Thank you for your business!You should be receiving an order confirmation from Paypal shortly.Exit Shopping Cart

Daniel Kennedy has been a resident of Central and South Florida for many years. In the 70's, he served in the United States Army as a Military Police officer of the 82nd Airborne Division. Following his military career, Danny became a volunteer fire fighter, helped form the Ellamore, West Virginia Volunteer Fire Department and became a Lieutenant there. In 1978, he moved to Florida and worked for Dade County Water and Sewer as a pipe fitter foreman installing fire hydrants to large water mains that there three feet underground usually meant he was diving under water to get the job done in some areas that started in 1980. In 1984 Danny moved to Highlands County where he trained hard for over 13 years (combined) as a Fire Fighter, with Leisure Lakes Volunteer Fire Department. There, he trained as a safety officer and became a captain training officer. He is certified in many areas of fire training (including NIMS), and responding to hazardous materials calls.

In addition to fighting major structure fires, major brush or wild fires, and responding to first responder calls, he joined the US Coast Guard Auxiliary. Daniel served as a Safety Inspection Staff Officer as a member of the U.S. Coast Guard Auxiliary. He has survived many injuries (including service related injuries from airborne training, and later being shot by a careless hunter) from that career and has taught others how NOT to get hurt when doing the job.

In 1983, when the story broke out about the kidnapping of young "Adam Walsh" and the massive man hunt began. This horrifying incident inspired Danny to establish the Dade County Child Search Organization which was formed to train and manage volunteers to work as reserve officers for the Metro-Dade Police Department. This organization worked with the Dade County Police/Missing Persons Units (Sgt. Pruitt) to manage and organize concerned citizens in the neighborhood of the missing child thereby enhancing the search perimeters and conduct thorough investigations.

During the investigation of the disappearance and subsequent murder of Adam Walsh Danny recognized the need for an organization that could rapidly respond to the 'needs of a child' and parents, and not the egos of official agencies that were involved with any case. Our direct email address is ([email protected]). 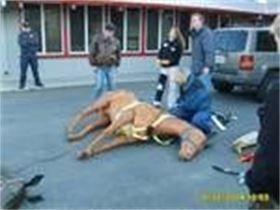 Please send for your application and/or resume to:

or send it to:

All applications for medical personnel and medical information, please send the copied information to this above location, ATTENTION: Nursing Division

Lt. Carol Humphrey of District VI, Station I - Rescue K9 Division is below with Duke, her partner is searching for Missing Animals.

Please send for your VOLUNTEER application and/or resume to:

To become a Volunteer Member of Healing Spirits Ranch and Rescue, please call or write us a letter with your name, your current mailing address and email address if available, your phone number, best time to call, and we will mail, or email you an application to be filled out. Once we receive your application, more information will be mailed to you usually within 2-3 days or you will be contacted by an officer for further information.